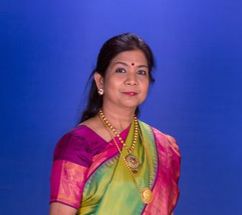 In 1985, Kirupanithy moved to Germany where she toured as a professional dance artist. As there were no Bharatanatyam dance teachers in Germany at that time, many people had requested Kirupanithy teach the form. And so, on January 22nd 1986 she began her own school of professional bharatanatyam training. As more students graduated from her school, they began dancing professionally alongside Kirupanithy. In 1993, Kirupanithy published her first book, “Bharatha Muthirai” which is a book of dance theory from grade one to seven.

In 1993, Kirupanithy moved to Canada and opened the Canadian branch of her school “Laya Bhava Dance Academy.” Many returning students had joined the school because they had already learnt from her in either Germany or Canada. In 1997, she published her second book “Bharatha Natyam” which is a book consisting of all the adavus with pictures drawn by herself. This book teaches the technique of adavu (detailed analysis of steps). In 1999, Kirupanithy was choreographing many productions (professional and student productions) and has had her group tour in Europe and USA. She has also conducted many workshops and has had the privilege of inviting her Guru Adyar K. Lakshman to conduct workshops at her school. He has conducted workshops in Germany, and in Canada in the summers of 1995, 2005, 2006 and 2009.

Kirupanithy has many students who have completed their arangetrams and are now teaching and dancing professionally. In addition, Kirupanithy completed her business accounting diploma in Canada. Kirupanithy has volunteered at Markham Gateway Public School and the Sathya Sai Baba Center to teach bharatanatyam and spread her joy of the art.